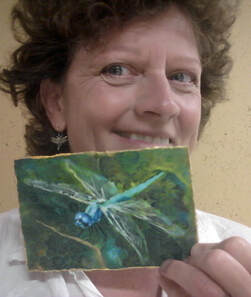 ​"Colorist” is the term frequently used when referring to Lanie Frick as a painter. Her use of color infuses subjects of horses, livestock, wildlife and the supporting landscape, with light and mood. Lanie’s painting style is one of intuitive expression where realistic subjects show movement and life by vivid notes of impressionism. 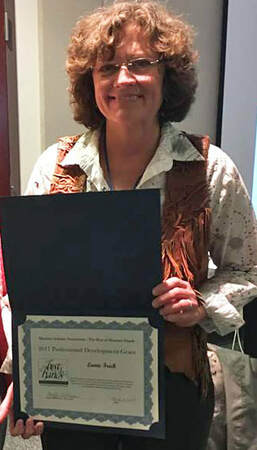 ​Lanie is a juried member of Women Artists of the West (WAOW) and Best of Missouri Hands (BOMH). She has been the Featured Artist for large events such as the Nebraska Horse Expo and PRCA (Professional Rodeo Cowboy Association) Rodeo in Missouri. Her paintings are regularly juried into regional and national exhibitions including the 2014, 2015 and 2016 National WAOW shows, "Gallopalooza" of Louisville, Kentucky, as well as published internationally in books and magazines. Corporate collectors such as Brewer Science of Rolla, Missouri, and many private collectors throughout the United States and abroad, have purchased her paintings. 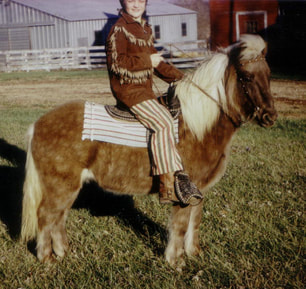 Lanie’s art career began around age three when she told her mother, “I would like coloring books without pictures in them." The basement became a testament to her artistic side as she left paint splashes on everything. Though receiving a college art scholarship, Lanie’s independent spirit chose to take the artistic road less traveled. She started a graphics business in 1984 while also painting horse and pet portrait commissions. Along the way she studied under professional artists Sam Savitt, Fay Moore, Carrie Ballantyne, Phil Starke, Elin Pendleton, and Robert Burridge, to name a few.

​Missouri country has always been home for Lanie.
She grew up on a farm in east-central Missouri and now lives in rural Texas County, Missouri. Whether painting in studio or outdoors, she is surrounded by her inspiration. When she isn't painting, you will most likely find Lanie trail riding, kayaking or hanging out in the barn with the horses.